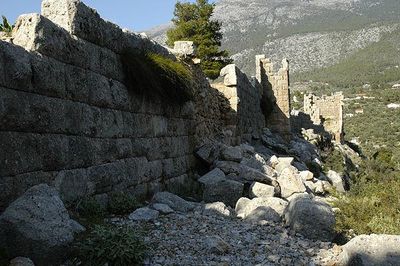 Aigosthena was an ancient Greek fortified port city of Megaris, 19 km northwest of the ancient city of Megara to which it belonged. It is also the name of the coastal settlement at the foot of the ancient city walls, also known as Porto Germeno. The ancient citadel which stands at the foot of Mt Cithaeron and extends down to the sea at the inlet of Aigosthena, on the east side of the Gulf of Corinth, is famous for retaining several of the tallest surviving towers of ancient Greece.

Aigosthena is situated on the Alkyonides Gulf, a bay of the Gulf of Corinth. It is surrounded by forested mountains: the Cithaeron to the north and the Pateras to the south. Aigosthena was historically the northernmost city of the Megaris . It is 10 km west of Vilia, 20 km southwest of Thebes 48 km northwest of Athens.