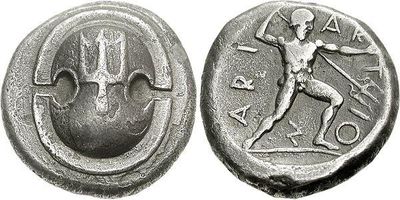 Haliartus or Haliartos , also known as Ariartus or Ariartos or Hariartus or Hariartos , was a town of ancient Boeotia, and one of the cities of the Boeotian League. It was situated on the southern side of Lake Copais in a pass between the mountain and the lake. It is mentioned in the Catalogue of Ships in the Iliad by Homer, who gives it the epithet ποιήεις in consequence of its well-watered meadows.
In the invasion of Greece by Xerxes I, in 484 BCE, it was the only town that remained true to the cause of Greece, and was in consequence destroyed by the Persians. It was, however, soon rebuilt, and in the Peloponnesian War appears as one of the chief cities of Boeotia. It is chiefly memorable in history on account of the Battle of Haliartus fought under its walls between Lysander and the Thebans, in which the former was slain, 395 BCE. In 171 BCE Haliartus was destroyed a second time. Having espoused the cause of Perseus of Macedon, it was taken by the Roman praetor Lucretius, who sold the inhabitants as slaves, carried off its statues, paintings, and other works of art, and razed it to the ground. Its territory was afterwards given to the Athenians, and it never recovered its former prosperity. Strabo speaks of it as no longer in existence in his time, and Pausanias, in his account of the place, mentions only a heroum of Lysander, and some ruined temples which had been burnt by the Persians and had been purposely left in that state.