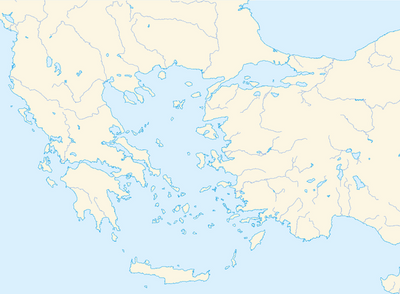 The Battle of Halmyros, known by earlier scholars as the Battle of the Cephissus or Battle of Orchomenos, was fought on 15 March 1311, between the forces of the Frankish Duchy of Athens and its vassals under Walter of Brienne against the mercenaries of the Catalan Company, resulting in a decisive victory for the Catalans.

Engaged in conflict with their original employers, the Byzantine Empire, the Catalan Company had traversed the southern Balkans and arrived in southern Greece in 1309. The new Duke of Athens, Walter of Brienne, hired them to attack the Greek ruler of neighbouring Thessaly. Although the Catalans conquered much of the region for him, Walter refused to pay them and prepared to forcibly expel them from their gains. The two armies met at Halmyros in southern Thessaly . The Catalans were considerably outnumbered and weakened by the reluctance of their Turkish auxiliaries to fight. The Company did have the advantage of selecting the battleground, positioning themselves behind marshy terrain, which they further inundated. On the Athenian side, many of the most important lords of Frankish Greece were present and Walter, a prideful man and confident in the prowess of his heavy cavalry, proceeded to charge headlong against the Catalan line. The marsh impeded the Frankish attack and the Catalan infantry stood firm. The Turks re-joined the Company and the Frankish army was routed; Walter and almost the entire knighthood of his realm fell in the field. As a result of the battle, the Catalans took over the leaderless Duchy of Athens; they ruled that part of Greece until the 1380s.