Monastery of the Holy Trinity

RouteYou » Wikipedia » Places of interest » Monastery of the Holy Trinity 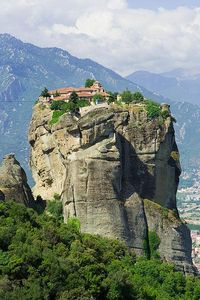 The Holy Trinity Monastery is an Eastern Orthodox monastery in central Greece, situated in the Peneas Valley northeast of the town of Kalambaka. It is situated at the top of a rocky precipice over 400 metres high and forms part of 24 monasteries which were originally built at Meteora, one of the oldest still existing of the Meteora monasteries . Six of the 24 monasteries are still active and open to visitors. The church was constructed between the fourteenth and fifteenth centuries and is included in the UNESCO list of World Heritage Sites titled Meteora.

The monasteries were built on rock cliffs in the deltaic plains of Meteora. The cliffs rise to a height of more than 400 metres . They are situated in the Pineios Valley within the Thessalian plains close to the town of Kalambaka. The rock cliffs, dated by chemical analysis to be 60 million years old, were created during earthquakes, and are of sandstone and conglomerate formations caused by fluvial erosion. The sediments were once in an inland sea during the Pliocene epoch. They rose as a cone during the earthquakes, forming steep rock columns, known as "heavenly columns". The area is hilly and forested, with river valleys, and a protected area known as Trikala Aesthetic Forest.