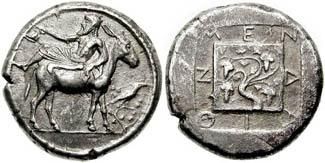 Mende , also Mendae or Mendai , or Menda , or Mendis, was an ancient Greek city located on the western coast of the Pallene peninsula in Chalkidiki, facing the coast of Pieria across the narrow Thermaic Gulf and near the modern town of Kalandra.

Mende was probably built during the 9th century BC by Eretrian colonists. The city owes its name to the minthe plant, a species of mint that still sprouts in the area. Mende's abundant lumber resources and possession of silver, gold and lead mines led to its rapid development. From the 6th century BC, it was one of the cities that controlled trade routes along the coast of Thrace; there were even confirmed dealings with the Greek colonies in Italy, especially concerning the export of the famous local wine Mendaeos oinos.