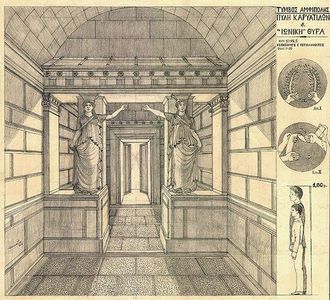 The Kasta Tomb , also known as the Amphipolis Tomb , is an ancient Macedonian tomb that was discovered inside the Kasta mound near Amphipolis, Central Macedonia, in northern Greece in 2012 and first entered in August 2014. The first excavations at the mound in 1964 led to exposure of the perimeter wall, and further excavations in the 1970s uncovered many other ancient remains.
The recently discovered tomb is dated to the last quarter of the 4th century BC. The tumulus is the largest ever discovered in Greece and by comparison dwarfs that of Philip II of Macedon, father of Alexander the Great, in Vergina. The excavation team, based on findings unearthed at the site, argued that the tomb was a memorial dedicated to the dearest friend of Alexander the Great, Hephaestion.