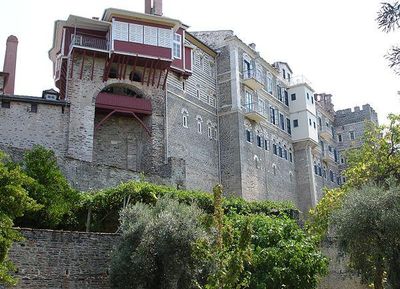 The Holy and Great Monastery of Vatopedi is an Eastern Orthodox monastery on Mount Athos, Greece. Vatopedi was founded in the second half of the 10th century by three monks, Athanasius, Nicholas, and Antonius, from Adrianople, who were disciples of Athanasius the Athonite. The monastery was expanded several times during its history, particularly during the Byzantine period and in the 18th and 19th centuries. More than 120 monks live in the monastery.