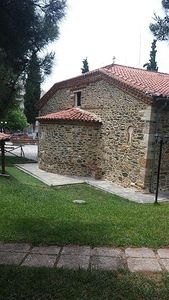 Evosmos ) is a suburb of the Thessaloniki Urban Area and was a former municipality in the regional unit of Thessaloniki, Greece. Since the 2011 local government reform it is part of the municipality Kordelio-Evosmos, of which it is the seat and a municipal unit. It has a land area of 9.927 square kilometres and its population is 74,686 . Due to rapid development, the population has been growing fast. Most of the new development is taking place in the northern district of the municipality called Nea Politeia .

Evosmos' first dramatic increase in population occurred when refugees from Asia Minor settled in the area in the early 20th century. The settlement was originally a small village called Harmanköy . In 1953, Harmanköy became an independent community and was renamed Neos Koukloutzas . Two years later it was renamed again to Evosmos, meaning a place that smells nice.