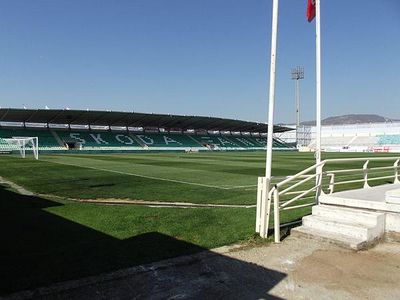 Xanthi FC Arena is a football ground built by Xanthi F.C. in Xanthi, Thrace, Greece. It was built over the course of ten months in 2004. It holds up to 7,244 spectators, with 80% of the seats under the roof. The stadium was built because of a disagreement between then FC Skoda Xanthi and the amateur club AO Xanthi. It is situated in an area where the club had built its training facilities . The stadium was officially inaugurated by the Brazilian legend Pelé on May 12, 2005.
The stadium's official capacity is 7,244 . It only has three stands, the fourth was promised but this never materialised, so there are boards behind the goal at one end.