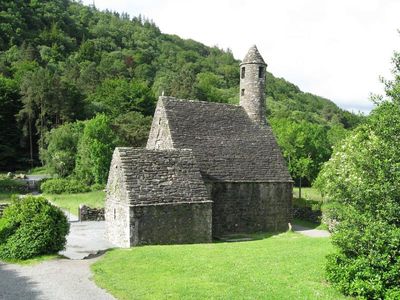 St. Kevin's Church or "Kitchen" is a stone-roofed building. It originally had a nave only, with entrance at the west end and a small round-headed window in the east gable. The upper part of the window can be seen above what became the chancel arch, when the chancel (now missing) and the sacristy were added later. The steep roof, formed of overlapping stones, is supported internally by a semi-circular vault. Access to the croft or roof chamber was through a rectangular opening towards the western end of the vault. The church also had a timber first floor. The belfry with its conical cap and four small windows rises from the west end of the stone roof in the form of a miniature round tower.