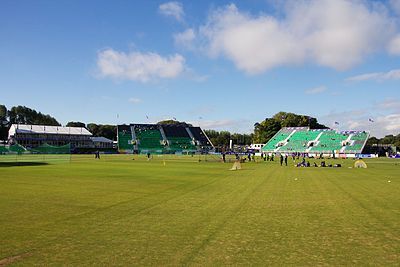 Malahide Cricket Club Ground or The Village is a cricket ground in Malahide, Ireland situated in the Lady Acre field of Malahide Castle grounds. The ground is owned by the Malahide Cricket Club. The ground has been developed to a capacity of 11,500 making it Ireland's biggest cricket venue and officially opened for international cricket in 2013. In November 2017, it was confirmed as the venue for Ireland's first Test match, when they played Pakistan in May 2018.
In September 2013, International Cricket Council cleared the ground to host international cricket. The ground hosted its first international cricket match when home team Ireland played against England with England winning by six wickets after captain Eoin Morgan hit 124 not out on what had been his home ground in his youth. The capacity was designed to be increased to 11500 using temporary grandstands and hospitality tents making it the biggest in Ireland with a record attendance for the Island of Ireland of over 10,000.