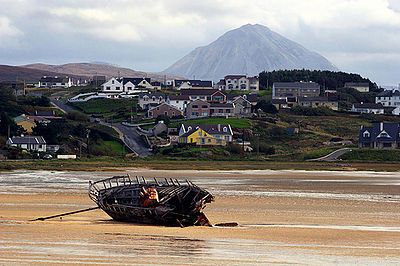 An Bun Beag , meaning "the small river mouth", is a small Gaeltacht village and townland in County Donegal, Ireland. It is officially the smallest townland in Gaoth Dobhair , but today the name Bunbeg is used to describe a large region of the parish. It is situated between Derrybeg and Dore and is home to many of Gweedore's amenities and businesses and local headers.

On the afternoon of Tuesday, 23 June 2009, a severe thunderstorm struck Gweedore and neighbouring areas.
It was centered on the adjoining villages of Bunbeg and Derrybeg, and lasted for several hours causing two rivers to burst their banks, flooding houses, shops and factories, ripping up roads and destroying bridges. Lightning which lasted for two hours damaged power lines and caused a major breakdown of mobile phone signals, causing people trapped by the floods to be unable to communicate. Up to 20 houses were cut off from the outside world after three access bridges were carried away by the swollen rivers.