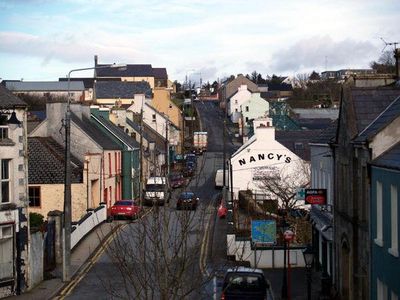 Ardara is a small town in County Donegal, Ireland. It is located on the N56 and R261 roads. The population as of the 2016 census was 732. The population of 731 at the 2011 Census represented an increase of about 30% since 2006. In 2012, The Irish Times named it the best village in which to live in Ireland.
The Donegal County Directory for 1862 shows the administrative positions that were held in the county in that year, including several in Ardara. There is a photograph of Brendan Behan in Ardara with a glass of tomato juice while visiting Gildea's in 1960.