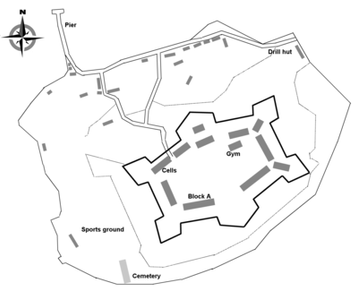 Spike Island is an island of 103 acres in Cork Harbour, Ireland. Originally the site of a monastic settlement, the island is dominated by an 18th-century star fort named Fort Mitchel. The island's strategic location within the harbour meant it was used at times for defence and as a prison. Since the early 21st century the island has been developed as a heritage tourist attraction, with €5.5m investment in exhibition and visitor spaces and accompanying tourism marketing. There were in excess of 10,000 visitors to the island during the month of August 2016. Spike Island was named top European tourist attraction at the 2017 World Travel Awards.
The principal evidence for a monastic foundation on Spike Island comes from Archdall's Moanasticon Hibernicum, which states that Saint Mochuada founded a monastery there in the 7th century. While this may be correct, another passage from the "Life of St Mochuada" implies that Mochuada was associated with a place called "Rahen" . A grant to Saint Thomas's Abbey in Dublin in 1178 of the Church of Saint Rusien on Spike Island may lend credence to a monastic settlement - as the name and date both indicate a Celtic foundation. The ruins of a church are reported to exist on Spike Island in 1774.