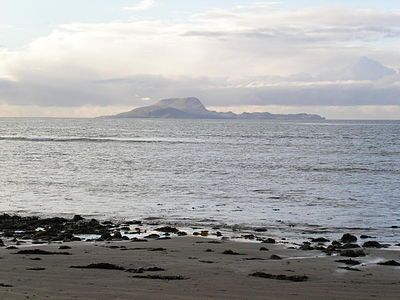 Clare Island is a mountainous island guarding the entrance to Clew Bay in County Mayo, Ireland. It is famous as the home of the pirate queen Gráinne O'Malley. Approximately 145 people live there today.

Through the Middle Ages, Clare Island was part of the lands of the O' Malley family. The ruins of an O'Malley tower-house, known as Granuaile's Castle because of its most famous resident, are close to the pier at the eastern edge of the island. Clare Island Abbey near the south coast of the island was founded by the O'Malleys and contains the O'Malley Tomb, a possible burial site of Gráinne O'Malley. The Abbey is known for its rare medieval roof paintings. In 1588 a ship from the Spanish Armada was wrecked on Clare Island and its men were killed by the O'Malleys.