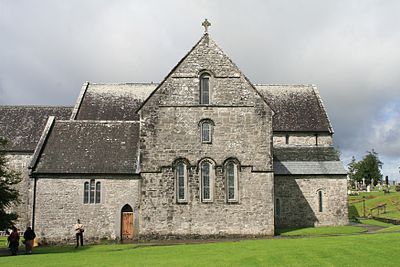 Ballintubber, officially Ballintober , is a village in County Mayo, Ireland, famous for Ballintubber Abbey which was founded in 1216. Set against the backdrop of the Partry Mountains, the countryside of Ballintubber is rich in history and historical sites.

The history of Ballintubber dates back to pre-Christian times, when people came from the east, through Ballintubber, on the way to a druidic site now called Croagh Patrick. When Saint Patrick brought Christianity to the west of Ireland after 461 A.D., he founded a church at Ballintubber. The present Ballintubber Abbey was founded in 1216 by King Cathal of Connacht. It is the only church in Ireland still in daily use which was founded by an Irish king. Church records for Balintubber and Burriscarra parish commenced in 1839 and are held at the South Mayo Family Research Centre in Ballinrobe.