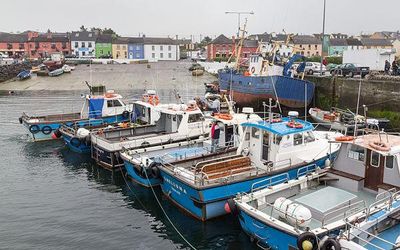 Portmagee is a village in County Kerry, Ireland. The village is located on the Iveragh peninsula south of Valentia Island, and is known locally as 'the ferry', in reference to its purpose as a crossing point to the island. Access to Valentia Island is now via the Maurice O'Neill Memorial Bridge from Portmagee, which was built in 1970 and named in memory of a member of the IRA executed in 1942 for his part in the shooting dead of Detective George Mordaunt in Dublin.
The name Portmagee comes from Captain Theobald Magee, a notorious 18th-century smuggler. Having served in the army of King James as an officer, Magee 'retired' to a life of merchant shipping between France, Portugal and Ireland. Thanks to the many inlets around the South West coast, his trade in contraband spirits, textiles and tea and tobacco was hard to police and therefore very profitable. He married Bridget Morgell, the widow of a rich Dingle merchant and also the daughter of the then representative for Dingle, Thomas Crosbie.
There is some suspicion that Magee's death in a Lisbon monastery was due to some exile imposed by the powerful MP. However, his wife and sons continued the family business of smuggling.