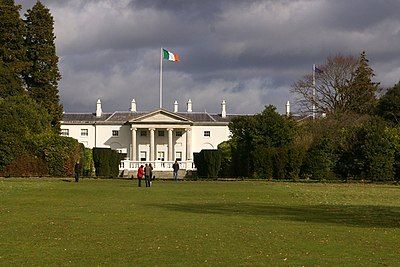 Áras an Uachtaráin ), formerly the Viceregal Lodge, is the official residence and principal workplace of the President of Ireland. It is located off Chesterfield Avenue in the Phoenix Park in Dublin. The building, which has ninety-five rooms, was designed by Nathaniel Clements and completed in 1751.

The original house was designed by park ranger and amateur architect, Nathaniel Clements, in the mid-eighteenth century. It was bought by the administration of the British Lord Lieutenant of Ireland to become his summer residence in the 1780s. His official residence was in the Viceregal Apartments in Dublin Castle. The house in the park later became the Viceregal Lodge, the "out of season" residence of the Lord Lieutenant , where he lived for most of the year from the 1820s onwards. During the Social Season , he lived in state in Dublin Castle.