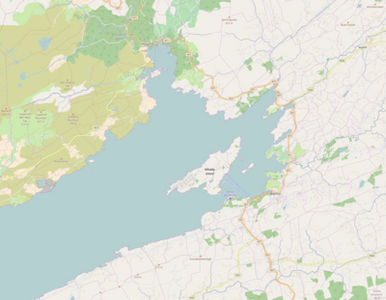 Whiddy Island is an island near the head of Bantry Bay, Ireland. It is approximately 5.6 km long and 2.4 km wide. The topography comprises gently-rolling glacial till, with relatively fertile soil. As late as 1880 the island had a resident population of around 450, mainly engaged in fishing and small-scale farming, but today the population has reduced to approximately 20 people. Previously home to Whiddy Island Naval Air Station the island is noted for its oil terminal facilities - and the related Whiddy Island Disaster.

As of the 2011 census, the island has a permanent, resident population of 20 people. This increases with visitors arriving during the tourist season; many staying in self-catering accommodation in the form of restored traditional island cottages.