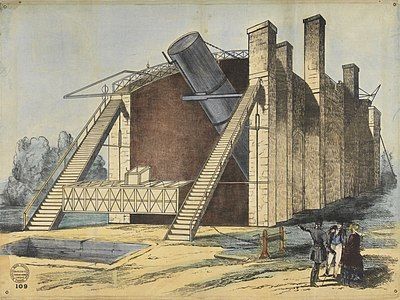 Leviathan of Parsonstown, or Rosse six-foot telescope, is a historic reflecting telescope of 72 in aperture, which was the largest telescope in the world from 1845 until the construction of the 100-inch Hooker Telescope in 1917. The Rosse six-foot telescope was built by William Parsons, 3rd Earl of Rosse on his estate, Birr Castle, at Parsonstown .
Parsons improved the techniques of casting, grinding and polishing large telescope mirrors from speculum metal, and constructed steam-powered grinding machines for parabolic mirrors. His 3 ft mirror of 1839 was cast in smaller pieces, fitted together before grinding and polishing; its 1840 successor was cast in a single piece. In 1842, Parsons cast his first 6 ft mirror, but it took another five casts, before he had two ground and polished mirrors. Speculum mirrors tarnished rapidly; with two mirrors, one could be used in the telescope while the other was being re-polished. The telescope tube and supporting structure were completed in 1845.