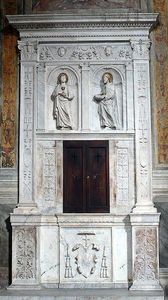 The Parish Basilica of Santa Maria del Popolo is a titular church and a minor basilica in Rome run by the Augustinian order. It stands on the north side of Piazza del Popolo, one of the most famous squares in the city. The church is hemmed in between the Pincian Hill and Porta del Popolo, one of the gates in the Aurelian Wall as well as the starting point of Via Flaminia, the most important route from the north. Its location made the basilica the first church for the majority of travellers entering the city. The church contains works by several famous artists, such as Raphael, Gian Lorenzo Bernini, Caravaggio, Alessandro Algardi, Pinturicchio, Andrea Bregno, Guillaume de Marcillat and Donato Bramante.

The well-known foundation legend of Santa Maria del Popolo revolves around the evil memory of Emperor Nero and Pope Paschal II cleansing the area from this malicious legacy. As the story goes, after his suicide Nero was buried in the mausoleum of his paternal family, the Domitii Ahenobarbi, at the foot of the Pincian Hill. The sepulchre was later buried under a landslide and on its ruins grew a huge walnut tree that ″was so tall and sublime that no other plant exceeded it in any ways.″ The tree soon became the haunt for a multitude of vicious demons harassing the inhabitants of the area and also the travelers arriving in the city from the north through Porta Flaminia: ″some were being frightened, possessed, cruelly beaten and injured, others almost strangled, or miserably killed.″