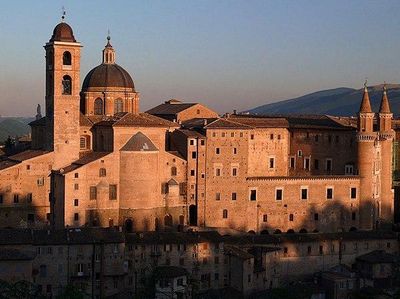 Urbino is a walled city in the Marche region of Italy, south-west of Pesaro, a World Heritage Site notable for a remarkable historical legacy of independent Renaissance culture, especially under the patronage of Federico da Montefeltro, duke of Urbino from 1444 to 1482. The town, nestled on a high sloping hillside, retains much of its picturesque medieval aspect. It hosts the University of Urbino, founded in 1506, and is the seat of the Archbishop of Urbino. Its best-known architectural piece is the Palazzo Ducale, rebuilt by Luciano Laurana.
The city is located in a predominantly hilly area, at the foothills of the Northern Apennines and the Tuscan-Romagnolo Apennines. The city is in the southern area of Montefeltro, an area classified as medium-high seismic risk. In the database of earthquakes developed by the National Institute of Geophysics and Volcanology, nearly 65 seismic events have affected the town of Urbino between 26 March 1511 and 26 March 1998. They include 24 April 1741, when the shocks were stronger than VIII on the Mercalli intensity scale, with an epicenter in Fabriano .