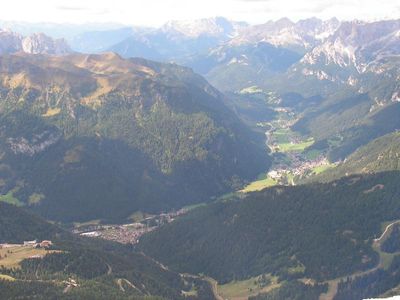 Val di Fassa lies in the Trentiner Dolomites. The valley was carved by the river Avisio and the glaciers of the Marmolada. The name Val di Fassa applies only to the highest part of the valley. Before Avisio flows into the Adige, the valley changes name. It becomes Val di Fiemme and Val di Cambrai. Some of the most important Dolomite areas surround the Val di Fassa: the Marmolada, Sella, Latemar, and Sassolungo Catinaccio. The inhabitants here largely depend on tourism. During the winter it is a major ski area. It is part of the Dolomiti Superski, one of the largest ski areas in the world. In summer the valley is very popular with hikers.