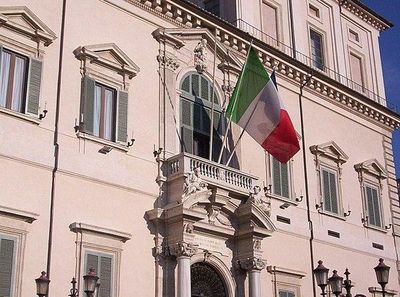 The Quirinal Palace is a historic building in Rome, Italy, one of the three current official residences of the President of the Italian Republic, together with Villa Rosebery in Naples and the Tenuta di Castelporziano, an estate on the outskirts of Rome, some 25 km from the centre of the city. It is located on the Quirinal Hill, the highest of the seven hills of Rome in an area colloquially called Monte Cavallo. It has served as the residence for thirty Popes, four Kings of Italy and twelve Presidents of the Italian Republic.

The Quirinal Palace was selected by Napoleon to be his residence par excellence as Emperor. However, he never stayed there because of the French defeat in 1814 and the subsequent European Restoration.