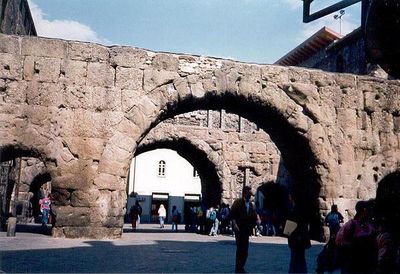 Aosta ; French: Aoste [ɔst], formerly Aouste; Arpitan: Aoûta [aˈuta], Veulla [ˈvəla] or Ouhta [ˈuhta]; Latin: Augusta Praetoria Salassorum; Walser: Augschtal; Piedmontese: Osta) is the principal city of Aosta Valley, a bilingual region in the Italian Alps, 110 km north-northwest of Turin. It is situated near the Italian entrance of the Mont Blanc Tunnel, at the confluence of the Buthier and the Dora Baltea, and at the junction of the Great and Little St. Bernard routes.

Aosta was settled in proto-historic times and later became a centre of the Salassi, many of whom were killed or sold into slavery by the Romans in 25 BC. The campaign was led by Terentius Varro, who then founded the Roman colony of Augusta Praetoria Salassorum, housing 3,000 retired veterans. After 11 BC Aosta became the capital of the Alpes Graies province of the Empire. Its position at the confluence of two rivers, at the end of the Great and the Little St Bernard Pass, gave it considerable military importance, and its layout was that of a Roman military camp.