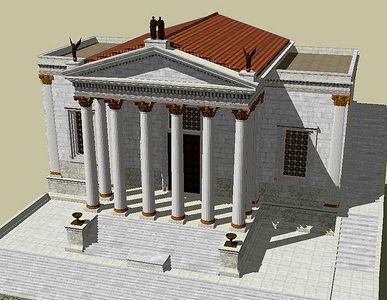 The Temple of Concord in the ancient city of Rome refers to a series of shrines or temples dedicated to the Roman goddess Concordia, and erected at the western end of the Roman Forum. The earliest may have vowed by Marcus Furius Camillus in 367 BC, but history also records such a temple erected in the Vulcanal in 304, and another immediately west of the Vulcanal, on the spot the temple later occupied, commissioned in 217. The temple was rebuilt in 121 BC, and again by the future emperor Tiberius between 7 BC and AD 10.

One tradition ascribes the first Temple of Concord to a vow made by Camillus in 367 BC, on the occasion of the Lex Licinia Sextia, the law passed by the tribunes Gaius Licinius Stolo and Lucius Sextius Lateranus, opening the consulship to the plebeians. The two had prevented the election of any magistrates for a period of several years, as part of the conflict of the orders. Nominated dictator to face an invasion of the Gauls, Camillus, encouraged by his fellow patrician Marcus Fabius Ambustus, Stolo's father-in-law, determined to resolve the crisis by declaring his support for the law, and vowing a temple to Concordia, symbolizing reconciliation between the patricians and plebeians.