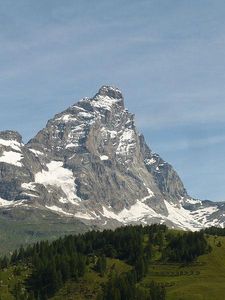 The Matterhorn is a mountain of the Alps, straddling the main watershed and border between Switzerland and Italy. It is a large, near-symmetric pyramidal peak in the extended Monte Rosa area of the Pennine Alps, whose summit is 4,478 metres high, making it one of the highest summits in the Alps and Europe. The four steep faces, rising above the surrounding glaciers, face the four compass points and are split by the Hörnli, Furggen, Leone/Lion, and Zmutt ridges. The mountain overlooks the Swiss town of Zermatt, in the canton of Valais, to the north-east and the Italian town of Breuil-Cervinia in the Aosta Valley to the south. Just east of the Matterhorn is Theodul Pass, the main passage between the two valleys on its north and south sides, and a trade route since the Roman Era.

The Matterhorn was studied by Horace-Bénédict de Saussure in the late eighteenth century, who was followed by other renowned naturalists and artists, such as John Ruskin, in the 19th century. It remained unclimbed after most of the other great Alpine peaks had been attained and became the subject of an international competition for the summit. The first ascent of the Matterhorn was in 1865 from Zermatt by a party led by Edward Whymper; it ended when four of its seven members fell to their deaths on the descent. This disaster, later portrayed in several films, marked the end of the golden age of alpinism. The north face was not climbed until 1931 and is among the three biggest north faces of the Alps, known as "The Trilogy". The west face, which is the highest of the Matterhorn's four faces, was completely climbed only in 1962. It is estimated that over 500 alpinists have died on the Matterhorn, making it one of the deadliest peaks in the world.