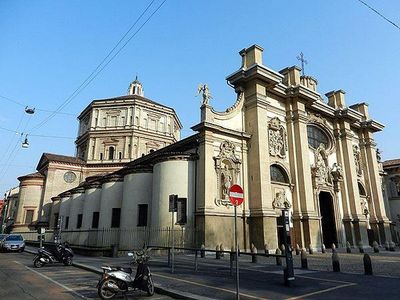 It was initially built in 1496 for the Order of Canons Lateran. The church plan as we see today was based on initial designs of Giovanni Antonio Amadeo, but realized as a centralized greek cross design by Giovanni Battagio. The architect Cristoforo Lombardo designed the large dome to replace the prior crumbling structure. By the late 16th century, under the design of Martino Bassi, the nave acquired a longer longitudinal axis, conforming with the structure of post-Reformation churches. The facade has a series of panels depicting the Passion of Christ. The late Baroque architect and sculptor Giuseppe Rusnati designed the ornate facade.

The interior and the canon's rooms contain a cycle of monumental frescoes by Ambrogio Bergognone completed in around 1510-1515. They depict Christ and the Apostles in the church, and Saints and Popes in elsewhere. The basilica has two organs: the one on right by the Antegnati Family, the one on left, by Valvassori. The church contains the following canvases: