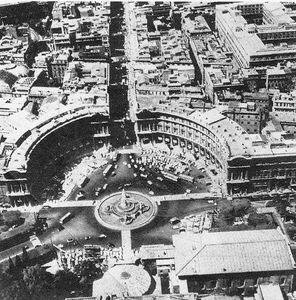 Piazza della Repubblica is a circular piazza in Rome, at the summit of the Viminal Hill, next to the Termini station. On it is to be found Santa Maria degli Angeli e dei Martiri. It is served by the Repubblica – Teatro dell'Opera Metro station. From the square starts one of the main streets of Rome, Via Nazionale.

The former name of the piazza, Piazza dell'Esedra, still very common today, originates in the large exedra of the baths of Diocletian, which gives the piazza its shape. The exedra present in the baths of Diocletian was incorporated into the gardens built by Cardinal Jean du Bellay; on his death in 1560, the land was purchased by Cardinal Carlo Borromeo, and eventually came into the possession of Cardinal Alessandro Sforza in 1579. Between 1598 and 1600 the exedra was converted into a church. Then, in 1885, the Via Nazionale cut through the centre of this structure.