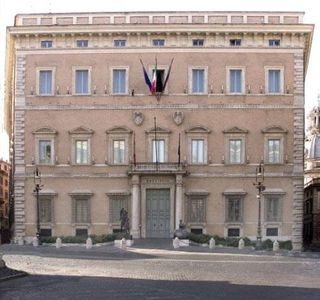 Palazzo Valentini is a palazzo in central Rome, Italy, not far from Piazza Venezia. Since 1873 it has been the base of the provincial and prefectural administration of Rome.

The palazzo was first built by cardinal Michele Bonelli, nephew of pope Pius V, who, in 1585, acquired a pre-existing palazzo from Giacomo Boncompagni at the extremity of what was then piazza dei Santi Apostoli. Today the palazzo is separated from that piazza by via Quattro Novembre, opened later to connect the new via Nazionale with piazza Venezia. The cardinal was also the owner of a large part of the area which extended, behind the palazzo, above the ruins of the imperial fora of Trajan and Augustus, known by the name "Pantano" due to being subject to impaludamenti or flooding. Over the same years the district on the ruins of the imperial fora was subjected to a general development of the land and to a systematic urbanisation, with the creation of the "quartiere Alessandrino" in the cardinal's honour . The quarter was destroyed in the 1920s and 1930s to open via dei Fori Imperiali.