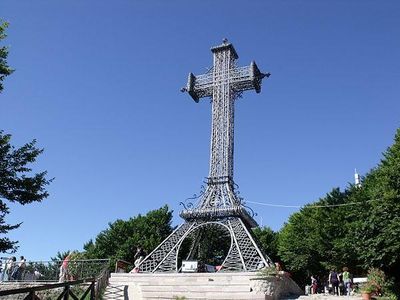 Mount Amiata is the largest of the lava domes in the Amiata lava dome complex located about 20 km northwest of Lake Bolsena in the southern Tuscany region of Italy. It is located within the provinces of Grosseto and Siena.

Mount Amiata is a compound lava dome with a trachytic lava flow that extends to the east. It is part of the larger Amiata complex volcano. A massive viscous trachydacitic lava flow, 5 km long and 4 km wide, is part of the basal complex and extends from beneath the southern base of Corno de Bellaria dome. Radiometric dates indicate that the Amiata complex had a major eruptive episode about 300,000 years ago. No eruptive activity has occurred at Amiata during the Holocene, but thermal activity including cinnabar mineralization continues at a geothermal field near the town of Bagnore, at the SW end of the dome complex.