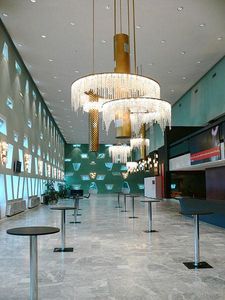 The Grand Théâtre de Luxembourg, inaugurated in 1964 as the Théâtre Municipal de la Ville de Luxembourg is the city's major venue for drama, opera and ballet. It underwent renovation work in 2002–2003 resulting in substantial improvements to the stage technology, acoustics and lighting facilities.
Since 1869, Luxembourg City's main theatre had been the Théâtre des Capucins located near the centre of the old town. In December 1958, after the need for a properly designed theatre building had become a priority, a competition was launched with a view to completing the construction work for the millennium celebrations in 1963. The winner was Alain Bourbonnais, a Parisian architect. Work began in autumn 1959 and the theatre was festively inaugurated on 15 April 1964.