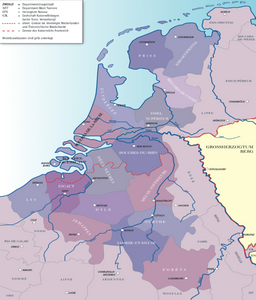 Forêts was a department of the French First Republic, and later the First French Empire, in present-day Belgium, Luxembourg and Germany. Its name, meaning 'forests', comes from the Ardennes forests. It was formed on 24 October 1795, after the Southern Netherlands had been annexed by France on 1 October. Before the occupation, the territory was part of the Duchy of Luxembourg and the Duchy of Bouillon. Its capital was Luxembourg City.
After Napoleon was defeated in 1814, most of it became part of the United Kingdom of the Netherlands, with the part on the east side of the rivers Our and Sauer becoming part of Prussia . The territory is now divided between the Grand Duchy of Luxembourg, the Belgian province of Luxembourg, and the German state of Rhineland-Palatinate.