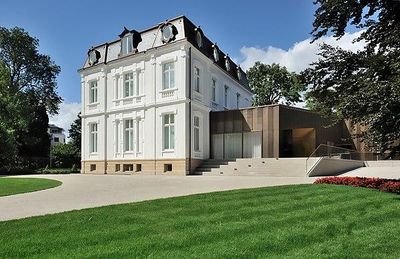 The Villa Vauban is an art museum in Luxembourg City. Recently renovated and extended, it exhibits 18th- and 19th-century paintings acquired from private collections.
Built in 1873 as a private residence, the villa owes its name to a fort built on the same site by Sébastien Le Prestre de Vauban as part of the city's defences. An impressive section of the old fortress wall can be seen in the museum's basement. The renovation work, completed in 2010, was planned by Philippe Schmit of the Luxembourg architectural firm Diane Heirent & Philippe Schmit. As a result of its innovative perforated copper cladding, the extension received the TECO Architecture Award in 2010. The museum is located in a park laid out by the French architect Édouard André , one of the leading landscape architects of his day.