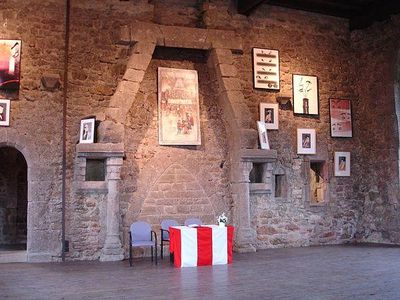 Larochette Castle stands high above the town of Larochette in central Luxembourg. Dating from the 11th century, the castle was destroyed by fire at the end of the 16th century. Since its acquisition by the State of Luxembourg in 1979, some restoration work has been undertaken.
The castle ruins are located on a promontory some 150 metres above the White Ernz which runs through the small town of Larochette. The access road crosses a large farmyard with fortified earthworks. The main building is surrounded by a wall, now partly destroyed. A deep ditch divides the castle into two parts. At the far end of the promontory, the remains of several manor houses attest to the high quality of the architecture and its rather pompous style.