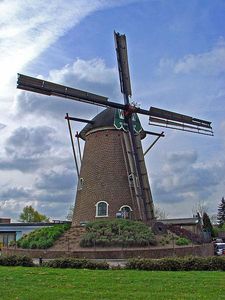 Groesbeek is a town and former municipality in the province of Gelderland, the Netherlands. In January 2015 the former municipality merged with Millingen aan de Rijn and Ubbergen. The larger area was known as Groesbeek until January 2016, when its name was changed to Berg en Dal.
Groesbeek is named after a small stream called the Groesbeek , which no longer exists in its original form. Hills and forests surround the town, and because of this, Groesbeek was isolated in the past, with a close community and a strong dialect.