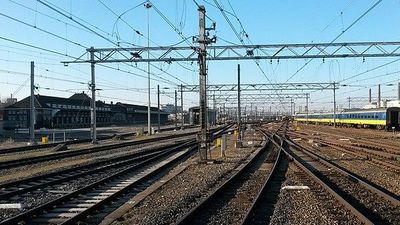 Maastricht ; Limburgish : Mestreech [məˈstʀeˑx]; French: Maestricht ; Spanish: Mastrique ) is a city and a municipality in the southeast of the Netherlands. It is the capital and largest city of the province of Limburg. Maastricht is located on both sides of the Meuse , at the point where the Jeker joins it. It is adjacent to the border with Belgium.

Maastricht developed from a Roman settlement to a medieval religious centre. In the 16th century it became a garrison town and in the 19th century an early industrial city. Today, the city is a thriving cultural and regional hub. It became well-known through the Maastricht Treaty and as the birthplace of the Euro. Maastricht has 1677 national heritage buildings , the second highest number in the Netherlands, after Amsterdam. The city is popular with tourists for shopping and recreation, and has a large international student population. Maastricht is a member of the Most Ancient European Towns Network and is part of the Meuse-Rhine Euroregion, which includes the nearby German and Belgian cities of Aachen, Eupen, Hasselt, Liège, and Tongeren. The Meuse-Rhine Euroregion is a metropolis with a population of about 3.9 million with several international universities.