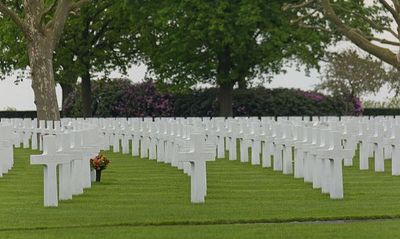 Netherlands American Cemetery and Memorial is a Second World War military war grave cemetery, located in the village of Margraten, 10 km east of Maastricht, in the most southern part of the Netherlands. The cemetery, the only American one in the Netherlands and dedicated in 1960, contains a constantly varying number above 8,000 American war dead and covers 65.5 acres . It is administered by the American Battle Monuments Commission.