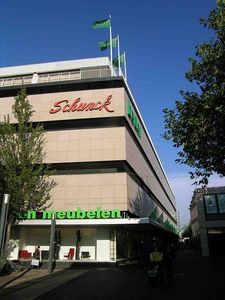 Schunck is the name of former fashion house and department store Firma Schunck in Heerlen, the Netherlands. It is also the name for the collection of buildings the firm has been housed in, one of which is known as the Glaspaleis , which is now a cultural centre and declared one of the 1000 most important buildings of the 20th century by the Union of International Architects.
The business grew from a small weaver's shop to the major warehouse in Heerlen and the innovating force in that town when coal mining declined. Over more than a century, it has been run by four consecutive generations of the family Schunck.