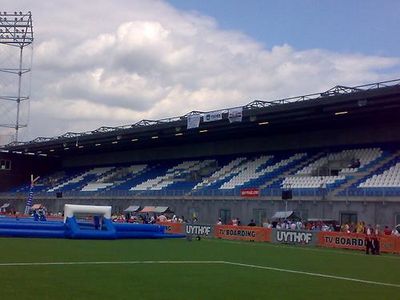 PEC Zwolle is a Dutch football club based in Zwolle, currently playing in the Eredivisie, the country's highest level of professional club football. They have played in the Eredivisie for a total of 16 seasons, reaching sixth place in 2015. They won the KNVB Cup in 2014 and also reached the final in 1928, 1977 and 2015.
This is the second incarnation of the club; its predecessor of the same name went bankrupt in 1990. The current club was founded immediately afterwards as FC Zwolle before renaming back to PEC Zwolle in 2012.