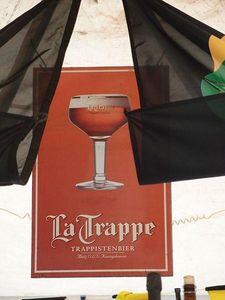 In 1884, the abbey opened a brewery inside the monastery in order to finance the monastery and contribute to charitable causes. Despite this goal, the brewery was run as a commercial enterprise. The abbey owned several bars in the area and produced lager under its own "Trappist" brand as well as contract brewing for several private labels. In 1969, the abbey licensed the brewing operations to the Artois Brewery . In 1980 the deal with Artois ended, and the monks went back to brewing themselves, this time a top fermented beer which had only been made in limited quantities since the 1950s. Over time the brewery introduced more varieties, first with Dubbel and Tripel in 1987, then in 1992 they introduced Blond. Between 1993 and 2000, the brewery also marketed a brand called Enkel. The brewery also produces the world's only Trappist witbier. The brewery also used to produce the Jopen beer.