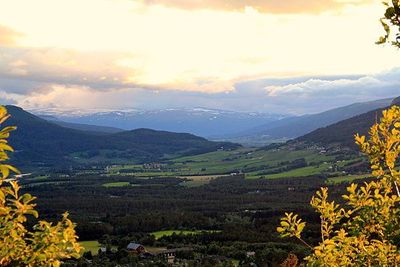 The village of Dombås lies in the Dovre municipality and serves as an administrative center in the upper Gudbrandsdal, Norway. It lies at an important junction of roads: south leading to the current capital of Norway, Oslo, west via Lesja leading to Åndalsnes on the sea and north to the old capital, Trondheim.

At Dombås, where there is a telegraph station, the scene had entirely changed, and fields of waving barley and potatoes greeted the eye.... Here, at a height of 2,000 feet above the sea, the crops were not quite ripe, the season being backward. Barley required a few more days of sunshine, and the potatoes were still in bloom. The evenings became cold, and the farmers' faces showed their anxiety. The wind was from the NNW, and for two consecutive nights black frost appeared. The potato-vines turned black, and the grain crop was seriously injured. After the first frost everybody was at work in the fields, women and men sheaving the barley, and every available hand digging the potatoes. There was sorrow in many a farmer's heart, for the people were now greatly distressed, and I detected tears on many a mother's cheek during these two days. After this sudden cold spell the weather became cloudy, a violent storm set in, and the ground was covered with eighteen inches of wet snow, though it was only the 20th of September.