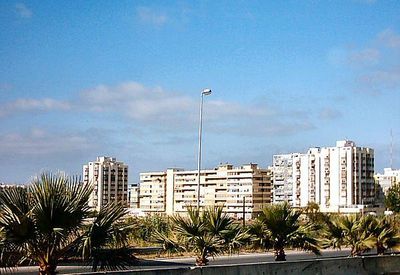 Costa de Caparica is a Portuguese civil parish, located in the municipality of Almada along the western coast of the district of Setúbal. The population in 2011 was 13,418, in an area of 10.18 km². Since December 2004, the Costa de Caparica has been designated as city within the urban hierarchy of Portugal.

The toponymy Caparica developed from a legend about an old woman who lived between Almada and the ocean, over cliffs of Sul do Tejo. The old woman, thin and frail, wore a multi-coloured patchwork cape to protect herself from the cold, and who pandered to the local people of the small hamlet in which she lived. Many assumed she was a witch and miser, who guarded a fortune, but who, nonetheless never missed mass and regularly panhandled in the streets. One day, after a long absence, the local villagers went to her humble cabana, where they discovered the body of the old woman within her cape and with a letter to the King. Presented with the letter and her cape, the King was surprised by the old woman's request to have him build a Church for the local people of her village. The King immediately ordered the cape destroyed, but was astonished to see gold coins falling from the cape. With the money he fulfilled the old woman's request from the rich bounty of her cape. From there the name Capa-Rica developed, for capa and rica , which became associated with the region.