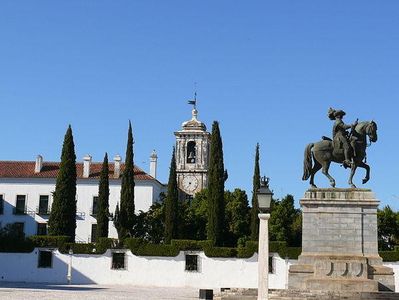 The Ducal Palace of Vila Viçosa is a royal palace in Portugal, located in the civil parish of Nossa Senhora da Conceição, in the municipality of Vila Viçosa, in the Alentejo, situated about 150 km east of the capital Lisbon. It was for many centuries the seat of House of Braganza, one of the most important noble houses in Portugal which was the ruling house of the Kingdom of Portugal from 1640 until 1910 when King Manuel II, titular head of the family, was deposed in the 5 October 1910 Revolution which brought in a Republican government.

Vila Viçosa became a fiefdom of the Dukes of Braganza when Fernando I of Braganza succeeded his father Afonso, 1st Duke of Braganza, and received the title of Count of Arraiolos from his grandfather, Nuno Alvares Pereira. Fernando I established his seat at the primitive Vila Viçosa Castle. However, following the 1483 execution of his son, Fernando II, 3rd Duke of Braganza, for treason by order of King John II of Portugal, the family was exiled to the Kingdom of Castile. Returning in 1498 , the family regained its ancestral lands, although Jaime, 4th Duke of Braganza , declined to live in the Castle of Vila Viçosa, owing to its association with his father's betrayal and murder.