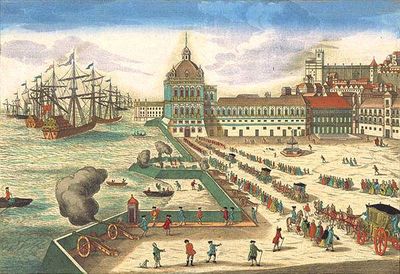 Ribeira Palace was the main residence of the Kings of Portugal, in Lisbon, for around 250 years. Its construction was ordered by King Manuel I of Portugal when he found the Royal Alcáçova of São Jorge unsuitable. The palace complex underwent numerous reconstructions and reconfigurations from the original Manueline design, ending with its final Mannerist and Baroque form.

The Ribeira Palace, as well as most of the city of Lisbon, was destroyed in the 1755 Lisbon earthquake. After the earthquake, the reigning monarch, King José I, suffered from claustrophobia and chose to live the rest of his life in a group of pavilions in the hills of Ajuda, and thus the palace was never rebuilt.