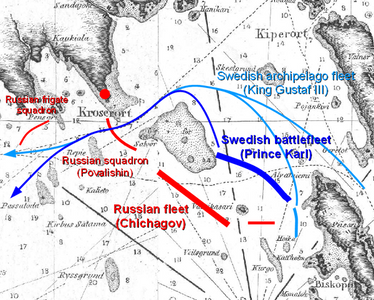 The Battle of Viborg Bay was a naval battle fought between Russia and Sweden on July 4, 1790, during the Russo-Swedish War . The Swedish Navy suffered heavy losses, losing six ships of the line and four frigates, but Gustav III of Sweden eventually ensured a Swedish naval escape through a Russian naval blockade composed of units of the Baltic Fleet, commanded by Admiral Vasili Chichagov. The battle ranks among the world's largest historical naval battles and also among the most influential, as it introduced the naval battle concept of "firepower over mobility".

In 1790, King Gustav III of Sweden revived his plan for a landing close to St. Petersburg, this time near Viborg. But the plan foundered in a disastrous attack on the Russian fleet at the Battle of Reval on May 13. A further attack on the Russian fleet off Kronstadt at the beginning of June also failed and the Swedish high seas fleet and the "archipelago fleet" both retired to Vyborg Bay.