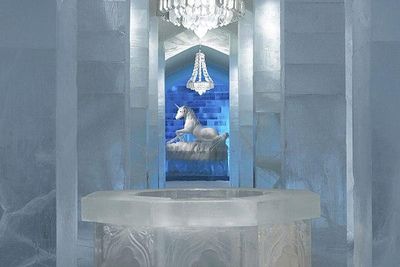 The Icehotel is a hotel rebuilt each year with snow and ice in the village of Jukkasjärvi, in northern Sweden, about 17 kilometres from Kiruna. It is the world's first ice hotel.
After its first opening in 1990, the hotel has been rebuilt each year from December to April.
The hotel, including the chairs and beds, is constructed from snow and ice blocks taken from the nearby Torne River. Artists are invited to create different rooms and decorations made by ice. Besides bedrooms, there is a bar, with glasses made of ice and an ice chapel that is popular with marrying couples. The structure remains below freezing, around −5 °C .