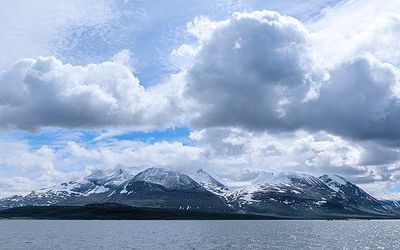 Áhkká , a.k.a. Akka , is a massif in the southwestern corner of Stora Sjöfallet National Park in northern Sweden.

The massif has twelve individual peaks and ten glaciers, of which Stortoppen is the highest at 2,015 metres . This peak is the eighth-highest in Sweden. Most notable is that the mountain has a vertical drop of 1,563 m , from the top of the highest summit down to the lake Akkajaure in the valley below, which is located at 453 m . This is the highest vertical drop found in Sweden. Since the lake below the mountain is regulated by a hydroelectric power station, its surface can drop down to 423 m , which makes the mountain's vertical drop rise to a maximum of 1,593 m . Due to the large level differences and the massif being well held together and rather isolated, it looks impressive, earning it the nickname Queen of Lapland. In the Sámi tradition it is a holy mountain, and some hikers regard it with a sense of awe and mystique.