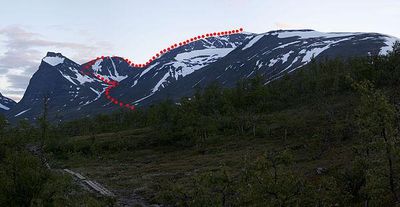 Kebnekaise is the highest mountain in Sweden. The Kebnekaise massif, which is part of the Scandinavian Mountains, has two main peaks. The glaciated southern peak used to be the highest at 2,120 metres above sea level, but has shrunk by 24 meters during the last 50 years, making the northern icefree peak at 2,096.8 metres the highest. Kebnekaise lies in Swedish Lapland, about 150 kilometres north of the Arctic Circle and west of Kiruna near the Kungsleden hiking trail between Abisko and Hemavan.

The Kebnekaise massif lies within a range of the Scandinavian mountains that is bordered by the glacial valleys Ladtjovagge , Tjäktjavagge and Vistasvagge . The highest points of the massif lie along the ridge that runs from the southern and northern summits to Kebnepakte at 1,990 metres . Other subsidiary peaks are Kebnetjåkka , Vierranvárri, Tolpagorni 1,662 metres , Guobircohkka 1,506 metres , and Siŋŋibákti 1,614 metres .