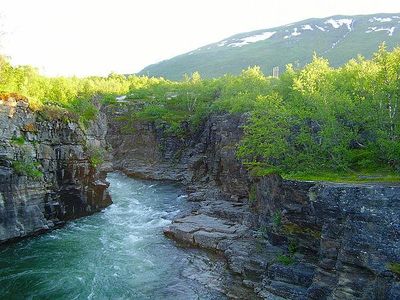 Abisko is situated in the Swedish province of Lapland near the Norwegian border by railway), and belongs to Kiruna Municipality, Sweden's northernmost and largest municipality. It begins at the shores of Torneträsk, one of Sweden's largest lakes where the village of Abisko is located, and extends some 15 km to the south-west. It is situated about 195 km . north of the Arctic Circle. The area of the park is 77 km2

Permafrost is common in the national park, though permafrost at lower elevations is disappearing because of global warming and increased snowfall.